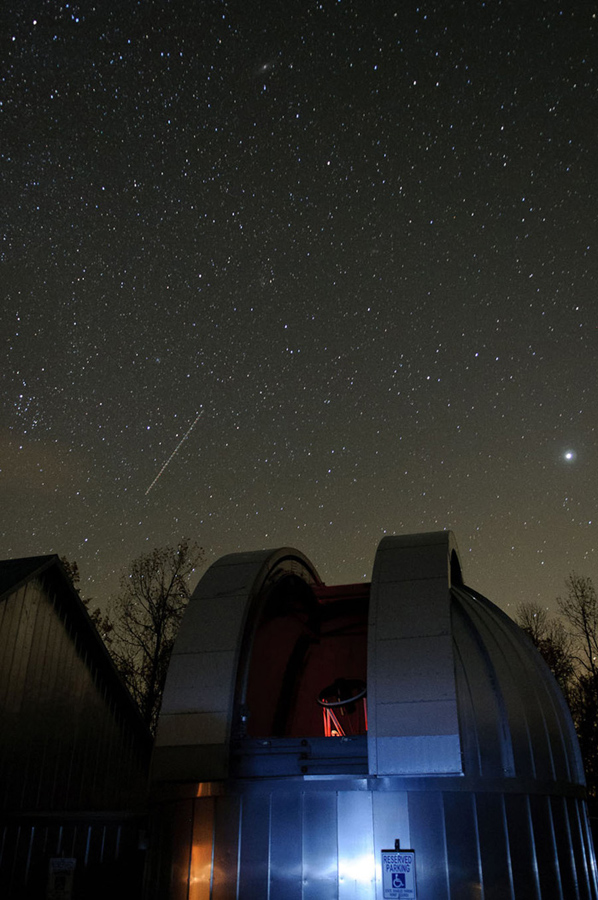 While a student at ASU this was a familiar “classroom” site for Leander, particularly for researching asteroid behavior. He visited the site again in October of 2011 and captured this dramatic image of the ASU Dark Sky Observatory and the clear star filled sky above. He selected a shutter speed of 30 seconds at an aperture of f/2.8 with a 1600 ISO, all to capture the light from as many stars as possible. It’s difficult to see at this reduced size but there is a fuzzy area near the top and just left of center where the Andromeda Galaxy can be seen. The bright “star” on the right is actually Jupiter. A passing plane with it’s flashing strobe light created the straight diagonal line. By zooming in it can be seen that with only a 30 second exposure, the stars are beginning to show a streak as the world spins below.
Leander has provided another interesting image that brings us back down to earth. This capture of a ballerina used only a single small flash to catch her flying through the air in perfect form with a red scarf billowing out in front and yet great focus on her face. Perfect timing? Leander says it was more a question of repetition. How the girl managed this maneuver multiple times is difficult to imagine. View the image here.