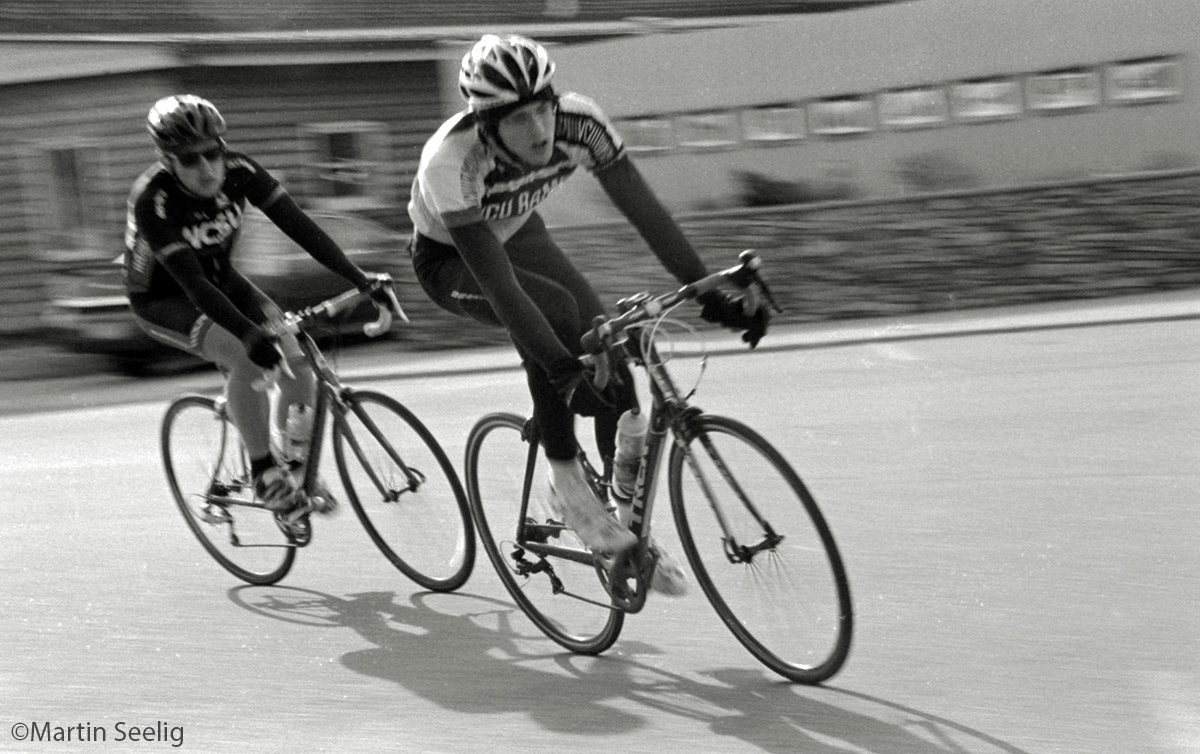 Marti not only collects vintage film cameras but is a dedicated film user, with no thought of “going digital”. He also enjoys a challenge, using his equipment and skills to broaden his reach into different facets of the photographic art. A recent bike race sponsored by the Atlantic Collegiate Cycling Conference provided such an opportunity. He chose a position in W. Jefferson near the Parkway Theater at the corner of Main and 3rd Streets. His camera du jour was a Minolta Maxxum 9 loaded with Ilford HP5+ (ASA 400) film and fitted with a 35-105mm lens. As the bikers raced by, he realized that the autofocus was too slow to react so he chose to manually pre-focus and position the shot so that the bikers would be in focus and well framed at a pre-selected distance. He used a panning motion and a slow shutter speed of 1/125 sec, attempting to blur the background while maintaining focus on the riders. For adequate depth of field, he chose f/11 as the aperture. Another challenge was the strong backlighting making it necessary to set the exposure for the shadow areas to prevent the riders’ faces from being underexposed.
All the planning and calculating culminated in the above successful portrait. The framing is excellent with “front” room for the riders to occupy. The overexposure of the foreground provided a very light gray pavement to add to the dark riders and the shadows, foreward of and leading the bikers, add depth and interest.

We’ve all been to art exhibitions of one type or another and, viewing the work with the Blue Ribbon or Best of Show award, said, “I sure don’t understand the great appeal of that work. There are 10 others here that I think are better.” Had there been a different “expert” judge or selection committee, or even the same committee another week, there’s a good chance that the results would have changed. It’s a very subjective call as to which is “best”. With that thought in mind, the two images below were submitted for the September b&w assignment and were not voted by the members as a favorite. The first image is by Leander Hutton and the second by Christine McCarty.

Leander has taken an unusual approach, with a sitting ballerina very much in character, pensive or perhaps “tragic”. The lighting is dramatic with the pointe shoes highlighted and the warehouse or basement setting reinforcing the loneliness of the dancer. Parallel concrete columns with no vertical distortion frame the dancer. All in all, a well thought out and executed plan by Leander.

The image below by Christine is another enigmatic scene. It’s well composed and open to a viewer’s imagination of the thoughts in the minds of both the horse and the rider. Choosing to view the sitting girl from behind adds a level of mystery and the chair is a somewhat surprising addition to the otherwise bucolic, open meadow setting. The prominent tree adds a touch of solidity.

Member’s comments have often stated how difficult it is to choose just 5 favorites from each assignment. These two images only serve to reinforce that reality. 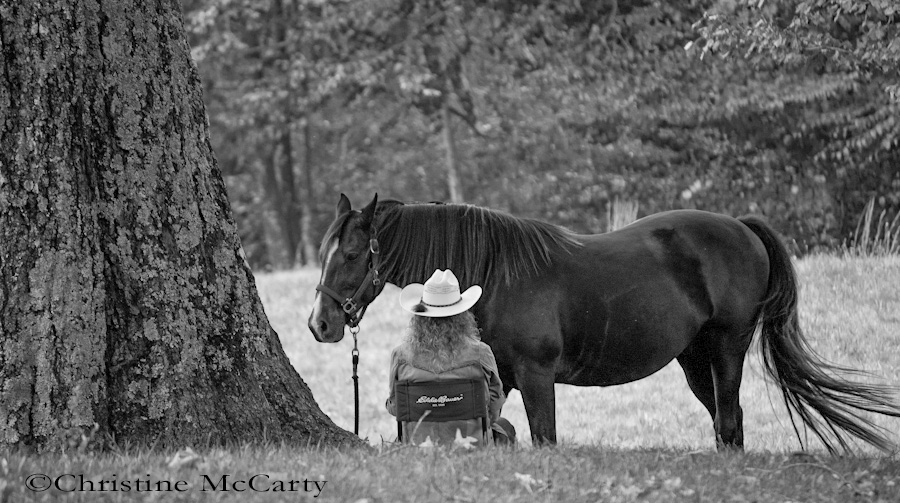